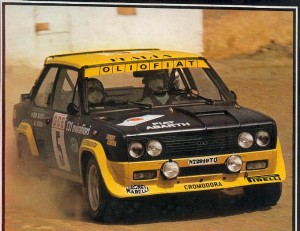 I could write exactly the same texts to 72219 as I did for the 72218. The car was used by Verini at Rally du Maroc. The plate was never again used in works team cars. Maybe they sold the cars away?

Verini retired this rally. Differential failure was the reason for retirement.